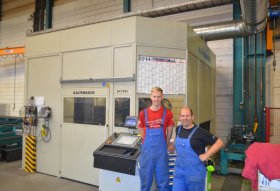 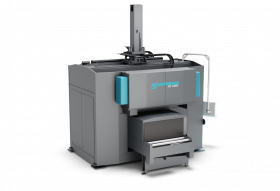 “Building is our Passion”: For Friedrich Bühler GmbH & Co., based in Altensteig in the Black Forest, this is much more than a pretty sounding slogan. It defines who they are – and have been for six generations now. What began as a small country smithy has grown into a steelworks with a capacity of up to 1500 tonnes per month. Some 160 employees see to it that even the most ambitious steel structures become reality. Technical know-how and the most up-to-date equipment together with an appetite for innovation have brought the company the nationwide attention it rightly deserves.

Experienced planners and designers develop ideas on behalf of prestigious clients and lend shape and substance to the sheer unlimited possibilities that steel processing presents. The result – whether it be an industrial facility or a major airport – are structures that are truly worthy of note. Whether it’s the Porsche Museum, Mercedesforum Stuttgart, Saturn Arena or buildings for German automotive brands, there’s scarcely a steel project that Bühler know-how can’t successfully handle. And it’s all accomplished with high-tech plants and CNC-operated machinery. A high level of automation helps the company remain competitive in an ever-challenging marketplace.

At Bühler, one of its top priorities is the continuous development of automation within the company. It’s only by keeping tooling and throughput times to a minimum and perfecting workflow operations that projects can be optimized in terms of cost and processes, thereby enhancing productivity. This is an important element in securing the success of the company in the future. It’s also essential that we find the right people for the job. Particularly in an economically vibrant area like that around Calw, there’s a great deal of competition for well-trained personnel. That’s where our equipment comes into play, especially the technologies that provide sustained support to facilitate workflows. Job security and satisfaction are now among the chief criteria in helping companies attract well-trained personnel.

When the decision was being made about purchasing a new cutter, it was criteria such as automation and using modern technology to enhance the attractiveness of the workplace that helped tip the balance in favor of one particular supplier over all the others. Many years of experience working with KALTENBACH, the internationally recognized producer of metalworking machinery based in Lörrach with its wide range of equipment used in processing steel and sheet metal, helped us decide in their favor. And as is so often the case, it was the little details that made all the difference. Manufacturing cutters is one thing, but it’s the willingness to respond to a company‘s particular needs and to deal with the existing circumstances of ongoing production that prove decisive. That’s where a manufacturer demonstrates whether it is ready to innovate and has the experience necessary to handle any problems that may arise.

The decision to award the contract to KALTENBACH and in particular their notching unit, KC 1201, came about specifically as a consequence of the company’s extensive experience in finding answers outside the bounds of the ordinary. Demands were high. It was essential, on the one hand, to relieve workers of some of the burdens placed on them by the physically strenuous nature of cutting operations. On the other hand, owing to the extremely cramped workspaces in production areas, it was important that collisions be avoided during processing. The smooth, functional interaction between old and new demanded practical experience and technical skill.

The experts from KALTENBACH were able to integrate the new notching unit into the existing reservoir of machinery in such a way that ensured operations could run smoothly. The notching robot, KC 1201, augments the steel processing operations at Bühler in an exemplary fashion by virtue of its manifold capabilities. It was developed specially for notching H, U and L profiles as well as for square tubing and uses a compact design, with up to 8 axes, so that it takes up as little space as possible. Bühler decided to employ an oxyacetylene cutter. If it proves necessary to expand to plasma cutting at some point in the future, this should pose no engineering problems. The unit can also be combined with a high-performance drill at any time.

The degree of control provided by the KC 1201 helps our employees with their work in a number of ways. Design data is simply downloaded to the unit and the software calculates the robot’s movements so that cutting occurs in an optimum fashion. It could hardly work more efficiently. The robot operates precisely in accordance with the designs supplied by the customer. Employees aren‘t forced to work with macros and can instead carry out their work autonomously. In contrast to the way work was previously performed using conventional cutting machinery, now not only are employees relieved of much of the hard physical labour involved, robot technologies have also dramatically increased the ability to carry out repeated tasks with great precision. These factors serve to improve productivity and ultimately make for a more attractive workplace. For Bühler this means being able to meet a customer’s specified requirements fully.

Erdmann Rath, production manager for steel construction at Bühler, is impressed with the newly acquired equipment: “This new unit from KALTENBACH, the KC 1201, has allowed us to achieve an extremely high degree of automation and make jobs in the cutting department more attractive. KALTENBACH has once again demonstrated a level of quality and service that’s entirely to our satisfaction. A partnership that works this well over a period of 10 years should, I think, be continued in the future.”