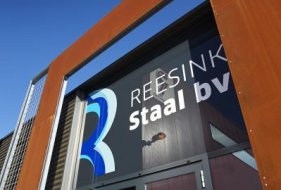 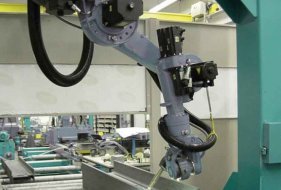 Experienced business people are hard to surprise. But that’s exactly what happened some time ago at a company in Holland called Reesink Staal b.v., based in Zutphen. Thanks to an update, the company was able to increase plasma cutting throughput times so much that even old hands were amazed. Little effort, but a great deal gained.

But let’s start from the beginning. Reesink Staal is a small company with a rich tradition. Founded in 1834, today it has some 50 employees and is well positioned to operate as a steel supplier within the Dutch market. It produces roughly 22,000 tons of semi-finished steel products annually for use in steel construction and industrial projects. The fabrication of steel beams made precisely to customer specifications constitutes the bulk of their orders. For that reason it comes as no surprise that Reesink has been using a number of machines from Kaltenbach, the internationally recognized manufacturer of metalworking equipment, based in Lörrach, as part of its production operations.

Brought up to speed, thanks to an update

Some time ago a used KC 1201 was added to the company’s pool of equipment: a Kaltenbach notching robot, which had already gained an excellent reputation for itself in the steel processing trade. It was specifically developed for notching H, U and L profiles as well as for square tubing. Designed to save space, it has up to 8 axes and can operate using either oxyacetylene or plasma. After checking it out and consulting with experts at Kaltenbach, however, it was determined that the unit did not meet expectations because it did not come up to current standards with respect to either the software or the hardware used.

The ongoing dialogue with wishes and demands in the marketplace constantly yields new benefits, in particular in terms of enhancements to software and hardware. This process allows both customers and producers to profit from their commonly held goal of continuous improvement. In Reesink Staal’s case, a decision was quickly made in favor of the UPDATE PACKAGE KC 1201, a retrofit that modernizes notching robots based on continuous and market-driven software optimization.

The specialists from Kaltenbach quickly disposed of initial concerns that an update would require a considerable amount of time to install. The formula they applied went under the rubric 4 + 1, which translates to: one day for installation and four days for training are all that are required to bring things up to current standards. This helps keep production downtime to a minimum. It was the speed of the turnaround that brought the first looks of surprise to the faces of everyone at Reesink. But speed was important not only in terms of how long it took to install the update but also with respect to the performance of the equipment once the update was completed.

André Buiting, Chief Manager at Reesink Staal b.v., goes right to the core of the matter: “The update has greatly benefitted us in terms of throughput and therefore productivity. We’ve turned to Kaltenbach in the past, because we trust them to provide technology we need. This latest investment has once again demonstrated that we made the right choice.”

What are the parameters responsible for this change? Generally the update helps improve overall workflow. In terms of hardware, it was the switch to a more powerful PC that brought about improvements. A crucial aspect of this relates, for instance, to the actions carried out by the cutting robot. Calculating high-precision contours demands advanced software and greater processing capacity. The more powerful the software and PC, the faster and more efficient production will be. This obviously offers a significant competitive advantage

Not all steel beams are created equal. Manufacturers often have to struggle with correcting unwelcome variations that crop up in the production process. So it’s good when this sort of thing can be taken into account ahead of time and corrected automatically, quickly and with no hassles, as is the case with the KC1201 update.

An additional simplification made to the update, the so-called cut manager, is also part of the current version of the touchpad, as is the latest SPS and programming software. These are used to control the robot and a simulation process is employed to check for potential collisions along the cut line. Any adjustments required occur automatically. This results in optimized programming for complex components.

Kaltenbach integrated additional features in the UPDATE PACKAGE KC 1201 as well. These include, for instance, the “tailored cut” option for cutting close to a flange. Special cutting sequences make it possible to handle difficult cut areas along a flange. Pesky beam tolerances of the kind that often crop up in actual practice can be corrected automatically using customized input options. It’s a very useful feature that, together with the automated speed reduction when cutting small holes using plasma, significantly facilitates the production process.

Any additional processing of steel beams that may be required, such as those involving welding procedures, demands the kind of precise angulation that plasma cutting can provide. Thanks to individually configured values, a cutting angle compensation is achieved to give components proper angulation. Many of the improvements included as part of the upgrade are based on market experience. Special sensors and control commands ensure a greater degree of safety; for instance through the automatic re-tensioning of the vices whenever there is a drop in pressure or the automated shutdown of the hydraulic pump when such proves necessary, which has a positive effect in terms of energy savings. In addition, procedures were rigorously scrubbed to achieve still more gains with respect to production time.

All in all, the UPDATE PACKAGE KC 1201 makes a decisive contribution in making the notching robot KC 1201 an optimally functional part of the production process. Following the update, Reesink Staal b.v. saw a fourfold increase in the speed with which programs could be generated for use in processing – an altogether good reason to be amazed.