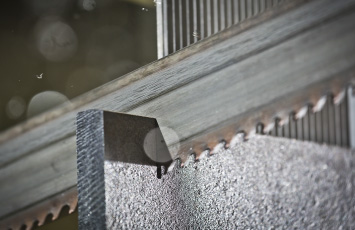 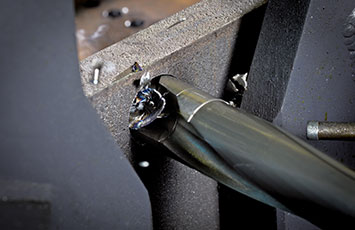 Most people seldom give a thought to how the asphalt under their feet/wheels actually got there. One thing’s for sure, Ammann Asphalt GmbH in Alfeld likely played a crucial role in it. Ammann Group’s global operations in Alfeld manufactures asphalt production and mixing equipment used around the world. The line of products ranges from stationary systems, designed for a production of several hundred tons per hour, to smaller mobile equipment. It’s no wonder, then, that the company ranks among the world’s leading manufacturers.

Ammann’s asphalt mixing equipment stands out not only in terms of size, which means it usually has to be transported by ship, but also by the fact that it requires lots of machined components made of sheet metal and steel. Some 400 employees in Alfeld are working every day to satisfy global demand – and the prefabrication department plays an important role in this regard. After all, they’re responsible for prepping and pre-fabricating hundreds of profiles and the drilling, cutting and related processing operations involved in this need to be carried out efficiently and with great precision.

One of the company’s goals, therefore, was to optimize the prefabrication department operations in their entirety; and minimizing the costs of production and accelerating production throughput were key parameters in this undertaking. So when it came to acquiring an automated cutting and drilling unit, it was important to integrate the latest technology into existing processes while also continuing to refine production processes to achieve a greater degree of flexibility. Increasing the level of automation in production not only relieves employees of certain tasks, it also ensures a higher level of safety and continuous precision. The advantages become readily apparent, particularly where parts have to be manufactured repetitively in large quantities. When it comes to cutting and drilling profiles, having the right equipment is the decisive lever in a tough competitive environment.

At the top of the list of potential suppliers of new cutting/drilling equipment stood Kaltenbach, an international manufacturer of metalworking machines based in Lörrach, which had already established a name for itself as one of the company’s suppliers. A Kaltenbach circular saw made in 1963 is still in use at Kaltenbach, where it is an integral part of production. The company considers this proven reliability and durability as the reason for its commitment to making additional investment in equipment made by Kaltenbach.

Due to space restrictions, the company decided in favour of a new system consisting of a KBS 750 band saw, a KDM 615 profile drill and the M152 GG measuring system, which has a compact design that is particularly well suited for tight spaces. The KBS 750 band saw with mitre for use on light-to-medium steel is very economical. A powerful motor ensures a high cut rate, while fully automated guidance and cut adjustment provides for particularly efficient operation. The NC-controlled cutting angle adjustment and excellent blade life along with the optimum cut quality provided by the oblique positioning of the saw blade, ensure greater economic efficiency.  Ammann also opted for a deflector, which eliminates the need for hands-on assistance through the use of an automated shunting system with many types of straight-cut components. The advanced software package PROFILINE, used in steel construction, makes operating the equipment quick and easy.

Just one look at the Kaltenbach KDM 615 high-performance drill and it’s clear that it makes the ideal companion piece to the band saw, with which it operates synchronously. The unit has three fully automated tool changers, each with five tools. A backlash-free slot accommodates HSS, carbide and solid metal drill bits to ensure the highest degrees of precision and maximum torque transmission. The machine is operated intuitively using an advanced software package to provide for efficient drilling, graining and countersinking. All these elements are crucial in allowing Ammann to meet the demands being made of it every day. Another feature of particular value to Ammann, and therefore an important factor in their decision to acquire this set of equipment, was the material-marking feature, which employs a special high-speed contour marking tool. This milling tool applies indicators or reference marks to the materials being processed, which facilitates and simplifies the processing steps that follow – such as, subsequent welding of parts onto steel beams. Data transfer is carried out quickly and securely via CNC technology.

The cutting/drilling unit works in conjunction with the 152 GG sliding measurement system  with dual gripper tongs. It’s the ideal solution in terms of precision. Once measurements have been made they can no longer be changed during processing. This significantly reduces the error rate which previously resulted when additional measurements were made by hand.

According to Ralf Knopf, Operations Manager at Ammann in Alfeld, the newly acquired equipment has fully satisfied the company’s expectations: “We have already seen our production rates increase by 10% thanks to the new cutting/drilling unit from Kaltenbach, and cost savings have reached the 10 percent mark. In addition, we also noticed a pleasant side effect:  The ease of operation and convenient design of Kaltenbach equipment has made work in prefabrication more appealing. Our employees are enthusiastic – especially about the opportunity to use this cutting-edge machinery.”